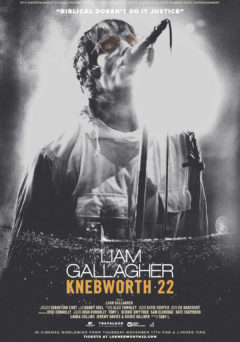 Earlier this year Liam Gallagher defied all expectations and returned to Knebworth, some 26 years following Oasis’ historic 1996 shows. Performing to 170,000 fans across two sold out nights in one of the first major stage shows following the pandemic, this year’s event coincided with a third solo album, ‘C’mon You Know’, attaining Liam’s third number one spot for a studio release in the album charts. ‘Knebworth 22’ is a new feature-length documentary that traces Liam back to the site of his former band’s defining performances, including all-new interviews, behind the scenes and concert footage captured from 20 camera positions.