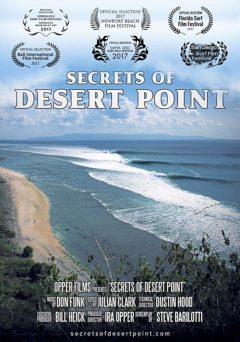 In the early eighties, while sailing off remote Lombok Island in Indonesia, young California surfer Bill Heick and his friends stumbled across the perfect wave…a pristine barreling left reeling endlessly and empty over a shallow, live-coral reef. As treacherous as it was beautiful, it was later dubbed ‘Desert Point’ for its dry forbidding nature. In the years that followed, a pioneer crew of hardcore surfers set up a makeshift beach outpost and kept their treasure off the surf-media map for almost a decade. Their mission: to surf uncrowded Desert Point at the highest level possible…no matter the cost.