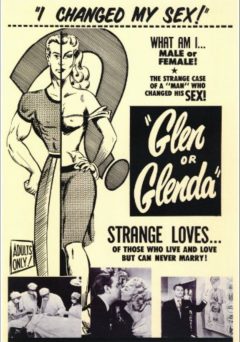 ‘A rich amalgam of film noir, the manipulative authority of the medical profession, and the power of sexuality.’ — Bright Lights Film Journal

Thoughtful, surreal, and daring, GLEN OR GLENDA is the infamous directorial debut from Ed Wood (PLAN 9 FROM OUTER SPACE). Glen (played by Ed himself) has a secret which could destroy a happily-ever-after with his lady, for how can she handle another woman in Glen’s life? And what will she do when she finds out Glen is the other woman? And what in the world is Bela Lugosi going on about when he says, ‘PULL THE STRINGS?!’ As we re-examine our cinematic past, GLEN OR GLENDA emerges as the world’s first trans-centric movie—though as it predates contemporary terminology, its characters are not technically definied within the movie as ‘trans’. GLEN OR GLENDA is not only rock-solid history—it’s deeply touching as well.